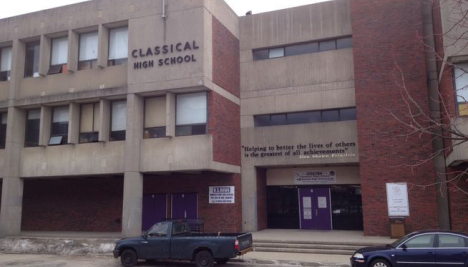 The bell pierced through the noisy AP Physics class, awakening the sleeping students and halting all side conversations, signaling the end of the day. Pouring out into the hallway and following the stream of students headed towards their lockers, I paused right at my friend’s locker. We both shared the same mischievous grin. We had gotten away with it again.

It all happened so fast.

We pushed the double doors entering another set of cloudy blue broken lockers stationed on one side of the wall and political murals on the other side. Walking in pairs or trios, laughing so hard our vision was clouded. As I opened my eyes and wiped away a tear of laughter with the sleeve of my shirt, purse, and phone clutched tightly in my right hand, I spotted him. He never walked this way after school. Why was he on the first floor? We spotted each other at the same time, amongst the sea of underclassmen playfully hitting each other. My internal instincts were telling me to run. So that’s what I did. Four years of track practice prepared me for this. I turned around, ending my conversation with my friends, and made a beeline for the door we entered out of.

“Why are we running?” my friend asked cluelessly as she followed closely on my heels.

“We’ve been caught!” I said, pausing for a breath once we were out of his view, letting my guard down.

We originally thought it was a fool-proof plan: How to get out of an AP Psychology exam. Show up to school on time, make sure not to alarm your parents and raise any questions. Miss the homeroom period so you will be marked absent by the office. Do not officially sign into school until the class period before lunch. Avoid Mr. Jones, the AP Psychology professor, until the next morning, after you spent the night studying for the exam. It was 2:50 pm and we had almost gotten away with it.

We must have taken three short breaths before Mr. Jones’s lanky frame pushed open the heavy eggplant double doors, his finger pointed in our direction.

“Stop! Weasels!” he yelled as I dropped my book bag and jolted towards the main purple doors. If I could make it to those doors and outside to the open, this high-speed chase would be over.

We kept running and looking back. Zigzagging in between bystanders who were in awe watching this happen. Two Black senior students barely over 5’2 being chased by a tall middle-aged white teacher continuously screaming “weasels!” The students parted like the red sea, creating a clear path for us to run and our psychology teacher to follow.

My next instinct was to hide behind the tan pillars that supported the school. I leaned against it. Heart beating. Smile permanently plastered on my face. I glanced at my phone and decided to wait behind the pillar for a couple more seconds before coming out. The onlookers had gone back to their regularly scheduled program, signaling the end of this. I poked my head out. Mr. Jones hurled himself out of his very own pillar.

“Weasels!” he screeched. “Why did you guys run?”

“Why did you run?” I asked him. And we all started laughing.

“You guys are making up the test you skipped tomorrow morning,” he told us as he walked away. We sat on the benches sandwiched between the pillars and continued to laugh.

Dorbor Tarley is a senior Human Development and Family Science major on the pre-health track from Rhode Island.  During her free time she likes to read, travel, workout, try new food spots and hairstyles.

YAY! It’s that time again, we have 8 new posts u

Sorry for the wait!! The next 6 anthology pieces h

Get excited! The next 7 anthology pieces have been

The time you have been waiting for has arrived! Ou

Congratulations to all the member of the honors co

Thank you to everyone who submitted! We are offici

At TYSW, we want to know about you! Explore a new

The deadline is September 26th! Go to the link in

🌿We can’t wait to receive your submissions! R

Tell Your Story Walking is a creative nonfiction a